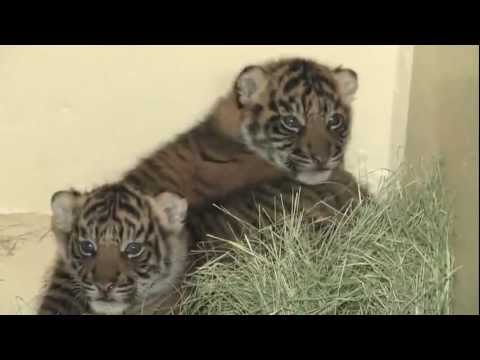 Los Angeles, Realwonderoftheworld.com – And now for a few new faces at the Los Angeles Zoo (12/9).

Three male Sumatran tiger cubs were born Aug. 6 to the zoo’s female tiger, Melukakan (a.k.a. Lulu), according to a statement released by zoo officials Monday.

Sumatran tigers are listed as an endangered species by the International Union for Conservation of Nature.

The carnivores are found only on the Indonesian island of Sumatra and require dense vegetation to hide and hunt their prey. They have been threatened by the destruction of their natural habitat and poaching.

Lulu will be a single mom, raising her three cubs by herself in seclusion during the next few months, according to the statement. Once the cubs have matured, they will be allowed to enter the public viewing area, probably in December, the statement said.

As the cubs mature, their vision will improve, their strength will increase and their personalities will emerge. Video and photos of the cubs will be posted online week by week.

Other new arrivals at the zoo include two giant otter pups born July 10, on display at the Winnick Family Animal Care Center. Giant otters are exhibited in only five U.S. zoos and are considered and endangered species because of poaching and water pollution.

As the hatchlings mature, they will grow from a 1 foot to about 9 feet long, weighing in at more than 200 pounds. They were not on display this week, according to the zoo’s statement.

About the author: komodo View all posts by komodo

Realwonderoftheworld.com - Komodo Dragon is a vulnerable species to extinction, and is categorized as Vulnerable in the IUCN Red List. Around...

Realwonderoftheworld.com - Music unites differences. Music allows us to meet travelers from various countries, local residents, sway together, and even...

Getting Closer to Komodo Dragon

Realwonderoftheworld.com - Komodo Dragon is carnivorous. Although they mostly eat carrion, studies show that they also hunt living prey by...

It’s impossible these days to think about Ubud – Bali’s cultural heart – without also...

Borobudur is one of the most famous Buddhist ruins in the world and Indonesia’s single...

The roaring engines fixed to a large wooden boat are finally quiet. Nothing can be...

Komodo dragon babies to make their debut at Phoenix Zoo

Realwonderoftheworld.com – Are you Indonesian reptile lovers? For those of you who are traveling in...

Chicago, Realwonderoftheworld.com - Komodo was promoted as “the Real Wonder of the World” in Chicago....